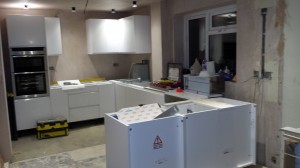 So we are 9 weeks into project extension. We are progressing well but I’m tired of it now and just want it finished:-) We still have a few finishes to do, bits of electrics and plumbing but all major stuff has been done, kitchen half way through being fitted, bathroom one is very nearly done and downstairs shower room is half way done.  The decorating has started and we should have most things done by this weekend before Christmas….I hope. The new bedrooms carpets and landing and stairs carpets are being fitted on Monday. But I’m telling you this process has taught some valuable lessons in what you take for granted in your home and what things you can cope without.
Mid November we got around 4 hours notice that we needed to vacate the house. In that time we had to pack enough stuff for a week for the 3 boys and us, thinking of school stuff, work clothes, things to keep the boys amused plus much more!. Also we had to pack up the current kitchen and bathroom as they were just about to be smashed up. The internal work was beginning. So off we went to the Premier Inn for 4 nights was the original booking. Managed to send the 2 smaller children to the inlaws and the eldest child whom couldn’t not go to school stayed with us. An adventure to start off with, and given that our house didn’t have heating this was luxury! Food was pre cooked Tesco snack food or the hotel restaurant. We expected to get home after one week or so.
Monday came and no return to the house..and this date kept moving on and on…we ended up staying in the hotel for 2 ½ weeks. A spend of £1000 gone from the contingency fund spent on hotel bills and food. I have to commend the Premier Inn staff, lovely receptionist girls who appeared to run the show. They put us in the biggest room in the hotel and kept putting us there as we continued to book more and more nights. The biggest frustration with them was that you could not negotiate at all on price, its like they know you are desperate so take advantage of last minute bookings. So I did get my own back, they offer a sleep guarantee, where you get your money back if you have a bad nights sleep. I reported a few of them and managed to get £120 knocked off the overall bill;-)
Anyways we eventually returned to the house 2 weeks ago at beginning of Dec. We had heating, the first big win. We had spent 1 week in the house with borrowed storage heaters. And living without heat is difficult. I was reading all sorts of blogs on how to stay warm without central heating! Did various things like layering up, keeping curtains wide up open on sunny days and shut at all other times. Despite the cold my football obsessed boys still wanted to run around in shorts! So we came back to heating. And the small pleasures, a toilet and a sink. The bathroom sink for about a week was our only source of water for everything. Then as each day passed thing started to come back, lighting appeared in every room, including the 4 new rooms. Then after a few days the bath was fitted and plumbed in, no more showers at work I could actually wash properly at home!
I’m most excited about the huge new area where our kitchen diner will be. Its currently got everything in place, cupboards, work surface, oven and dishwasher. Although nothing works quite yet. Sink and hob area going in today. Hopefully things will get plumbed in and switched on and we can start moving things back into the kitchen cupboards! Im getting a bit sick of microwave meals now!
And in terms of budget, well lets just say I didn’t take enough money out of the mortgage and am now having to get a bit more cash. But we are still at the point where it costing us less than the value its adding to our house.
And in terms of stress, well I didn’t quite imagine it would be as stressful as this. But then its all been happening whilst working full time and looking after the boys. Everything has been so last minute which has generated the stress. And plenty of things unplanned have happened that have cost extra money. Note to anyone planning an extension, you really do need that 10% contingency fund!
PreviousBlack Friday offers -Mrs mummy penny’s Top ten bargains
NextNew Year Personal Finances Overhaul – Top 10 Tips to save you £100’s
Share on facebook
Facebook
Share on google
Google+
Share on twitter
Twitter
Share on linkedin
LinkedIn 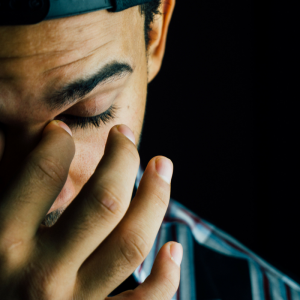 The rise of the financial scam is growing into a monster. Lockdown has given people more time and more ways to apply

Transferring a Child Trust Fund to a Junior ISA. With Beanstalk [ad]

Do you still have a Child Trust Fund? Hands up to an admission from me. I’ve had a financial admin task on